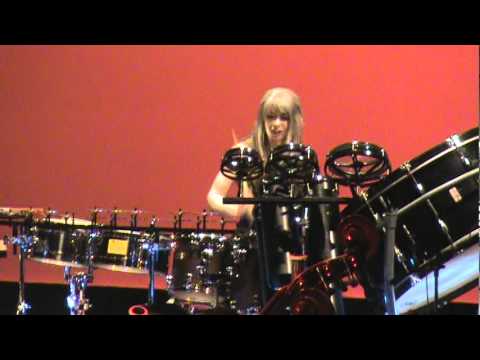 There's a story about Beethoven's two pianos. I don't know if it's true. I wasn't there. It sounds right. One of them was a normal piano of the time. I don't know if the strings were double wrapped or not (he had the nickname "String Buster" because he would play so forcefully on the keys during performances that he would cause the hammers to break strings) but he used it for playing pieces of music. There was another in his home that was special. It is said that after he became deaf around the age of 46, Beethoven sawed the legs off of a piano and placed it on the floor. When the man composed, he would use this piano so he could feel the vibrations through the floor. It was an effort to feel what was being composed since he no longer had the luxury of fully functioning ears.

Which brings me to Dame Evelyn Glennie featured in the video. She is one of the best percussionists in the world. This piece is being played as an encore, meaning she had already played, but another was prepared in advance just in case the audience wanted more. The orchestra knew (without the audience being at rehearsal) that it would most likely happen. I chose her to make this point for three reasons:

1) I thought a strings player would enjoy her performance without being tempted to judge their playing to hers.

She plays without shoes in her performances so she can feel the vibrations through the floor. I can see the reader now going back to view the video and seeing, sure enough, that woman is not wearing any shoes.

Both are using the same technique for a similar purpose. For composer and performer, the musician is making modifications in order to connect with the music. It is a different type of listening all together. One we can all take the opportunity to employ from time to time. I had an instructor who told us that "a musician is a person who connects one thing to the next" indiscriminately. Sometimes I think about this in regards to the sensitivity of artists when dealing with global events. There are moments when I hear about tragedies and I suddenly feel like I'm going through the same thing. I don't have to be there. I can't sit by without taking any action.

As we move further into the holiday season, I would urge the reader to think on ways to make connections where one's skills can do the most good. It may require us to make a sacrifice, lose the figurative shoes for comfort, or saw the legs off a thing so it can truly be realized. Observation in silence can be a powerful tool. When Beethoven's 9th Symphony premiered he followed protocol and conducted despite being deaf. It is said that he was several measures off so was still at work when the piece ended. It took a person from the stage to turn him around so he could see the enthusiastic ovation. I wasn't there, but I can make a final thought based on this account. Connecting can also be as simple as taking a lead from those around us. You may never hear of it, but the effects may impact others for years to come. You don't even have to be there.